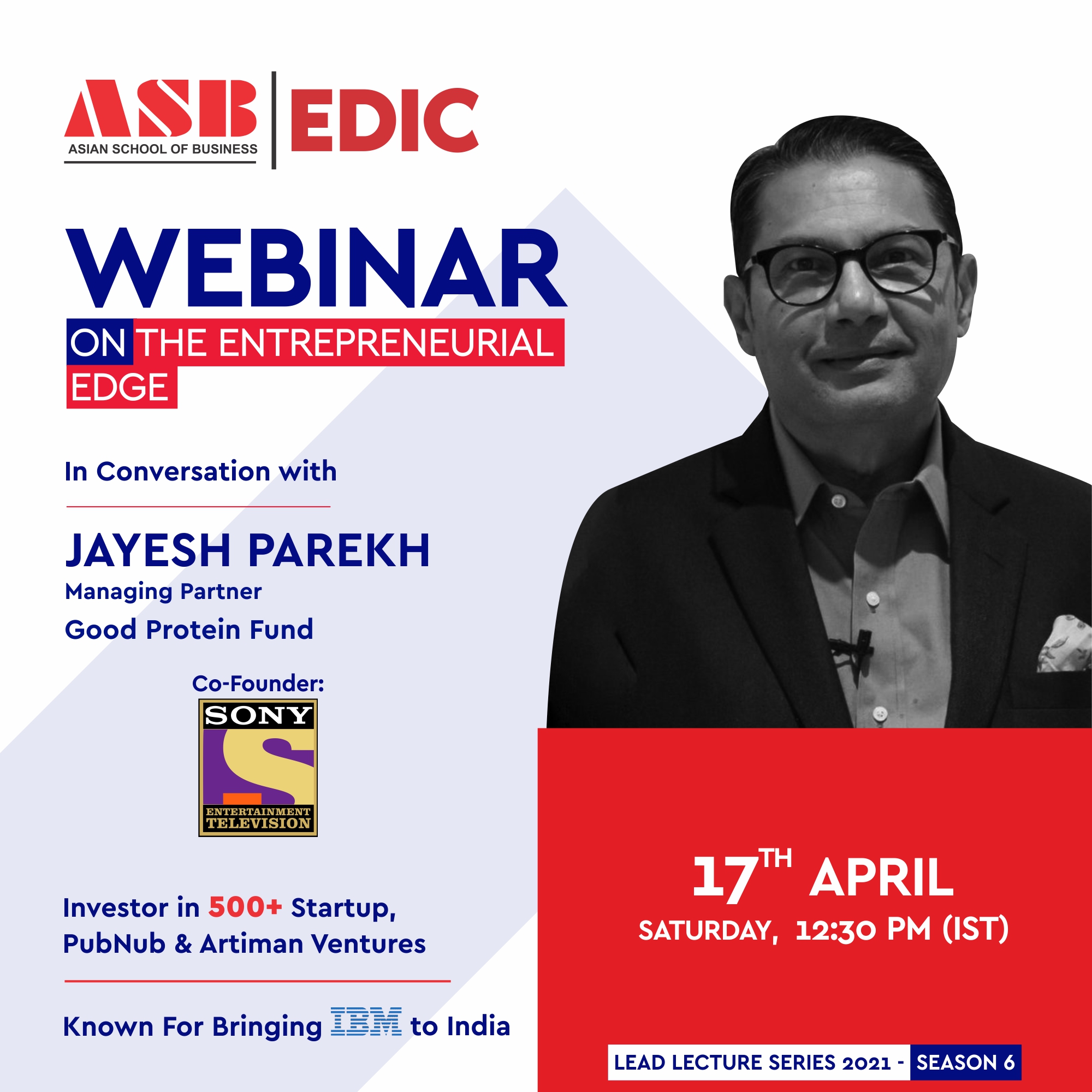 Mr. JAYESH PAREKH, Managing Partner-Good Protein Fund & Co-Founder-Sony Entertainment Television – Investor in 500+ Startup, PubNub & Artiman Ventures and Known for Bringing IBM to India – offered a highly insightful session on the topic “THE ENTREPRENEURIAL EDGE” for BBA/BCA/B.Com students & aspirants of Asian School of Business (ASB) on Saturday, 17th April 2021 at 12:30 pm under its “LEAD Lecture Series 2021: Season 6”. As it evolved, the webinar presented a marvelous opportunity for students and young entrepreneurs to listen to an expert who has contributed enormously in entrepreneurship development!

A Managing Partner at Jungle Ventures (a Pan-Asian Venture Capital cross-border technology fund based in Singapore), Mr. JAYESH PAREKH is also a Co-Founder of Sony Entertainment Television, a major television network of Sony Pictures Entertainment, a division of Sony Japan. Besides, he is a board member of Aavishkaar India Fund 2, Milaap and One Animation. Moreover, Mr. Jayesh is an active angel investor, who has invested in various Venture Capital Funds in Silicon Valley and Asia. He spent 12 years at IBM in Houston (USA) and Singapore, and was part of the IBM Offshore team that brought IBM back to India.

Holding a Bachelor’s degree in Electrical Engineering from M. S. University in Baroda, India, Mr. Jayesh also has a Masters degree in Electrical Engineering from the University of Texas at Austin, USA. In addition, he is a TiE Charter Member, an Entrepreneur-in-Residence at INSEAD, and a member of Indian Angel Network (IAN). A Singapore citizen, Mr. Jayesh currently lives in Singapore with his family.

An initiative of Asian Education Group (AEG) – considered as the largest centre for professional media, IT, law, management, fashion & hospitality education in Asia with world-class facilities – this webinar was organized by Asian School of Business (ASB) ) – which is a constituent group college of Asian Education Group and is ranked as the top private BBA/BCA/B.Com colleges in Delhi NCR – for all BBA, BCA & B.Com students & aspirants. Since this webinar was a closed session, students were required to register for the same. The webinar was followed by a lively Q&A Session with the distinguished guest.

This webinar session on Saturday, 17th April 2021 with Mr. Jayesh Parekh began with the distinguished guest thanking the ASB team for inviting him for this talk and said that he was highly honoured to be here to share his experiences on his entrepreneurial expertise that he was able to gather after years of struggle and experimentations.

Then, Mr. Jayesh Parekh began tracing his amazing entrepreneurial journey from his humble beginning being born in a middle class family when he had no television and no car and little money… to his getting admission in IIM, Calcutta which he dropped to fly away to Austin, USA to join for a Master’s degree in Electrical Engineering from the University of Texas and joining IBM in Houston (USA). He then recounted how he got a call from IBM to start its operations in India by shifting his base to Bangalore, which he declined and instead opted to operate from Singapore that turned out to be highly successful and led to the establishment of IBM as a big domain player within the country. It is at this point that he got an opportunity to enter into a joint venture with SONY – the Japanese multinational conglomerate corporation headquartered in Kōnan, Minato, Tokyo that operates as one of the world’s largest manufacturers of consumer and professional electronic products, the largest video game console company, the second largest video game publisher, the second largest record company, as well as one of the most comprehensive media companies – and co-founded Sony Entertainment Television in India that scripted its massive presence vis-à-vis path-breaking programmes like Indian Idol, Kaun Banega Crorepati, IPL, etc. He then exited out of Sony and wished to retire, but that lasted only 9 months, and he joined Jungle Ventures and also started Akhand Jyoti Eye Hospital, which he found most satisfying.

With this, Mr. Jayesh Parekh opened the session for questions from the ASB BBA/BCA/B.Com students & aspirants. A series of questions mostly related to his life, struggles and tremendous achievements in the vibrant domain of entrepreneurship development were put up by the students to which the distinguished speaker provided the most convincing answers.

Before concluding his most insightful talk, Mr. Jayesh Parekh shared an important message for all the young ASB students aspiring to fulfill their entrepreneurial ambitions. Offering a “Fourfold Advice”, the distinguished guest said, “(i) Focus on your executive decision making skills and follow your gut feelings; (ii) Train to do a long-term strategy; (iii) Build-up on your multitasking abilities; and (iv) Experience things yourself so as to develop a strong personal belief system for yourself.”

This done, Mr. Jayesh Parekh was presented with a shining “Memento” on behalf of Asian Education Group, which was most appreciated by the honourable guest.