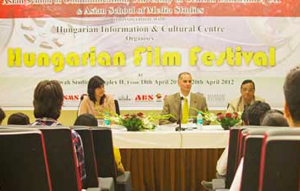 Director of Hungarian Information and Cultural Centre Mr. Tibor Kovacs inaugurated the ‘Hungarian Film Festival’ at Asian Business School, Marwah Studios-II. Elite media fraternity at the institute joined hands to ensure the success of the festival which was scheduled for 72 hours, from 18th April to 20th April 2012. The films from all eras, 19th century to 21st century were screened to depict growth from ancient to modern films.
The films were influenced by literature, they covered –personal, political and historical themes. Romans and Turkish effects were seen in the films. All students and visitors at Marwah Studios enjoyed all flavors of Hungarian culture through films.