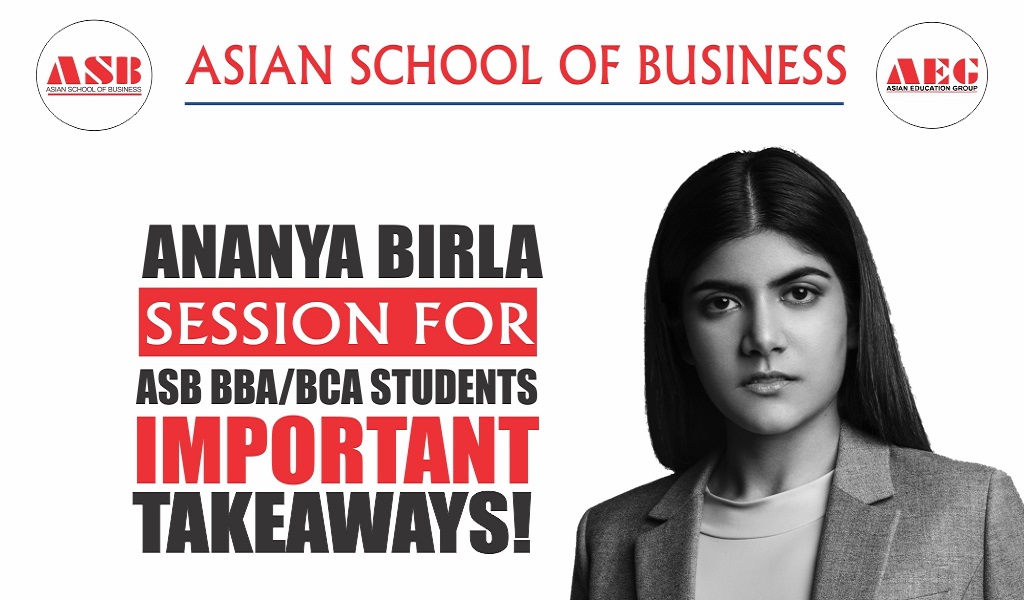 “Youth Icon”, social entrepreneur, acclaimed musician, mental health advocate, and a “Forbes Woman to Watch” – Ms. Ananya Birla – delivered a vibrant live webinar session on the topic “LET THERE BE LOVE” at Asian School of Business (ASB) on Saturday 22nd August 2020 at 10:00 am for all BBA/BCA  students & aspirants as part of its “Leadership & Entrepreneurial Aspiration Development (LEAD) Program”.

An Alumnus of SAID Business School, University of Oxford, Ms. Ananya Birla is a 26-year old singer-songwriter, entrepreneur and mental health advocate. She made waves by being the only Indian signed to Maverick Management who manage the likes of U2, G-Eazy, The Weeknd and Miley Cyrus. Listed as one of GQ’s Most Influential Young Indians, a Forbes Woman to Watch, an ET Panache Trendsetter, also featured on the Forbes 120 Power List. An incredible and dynamic Youth Icon with diversified achievements, is also the founder of Svatantra Microfin, Ikai Asai and Co-founder of Mpower. Her first five songs hit the 150 million mark on streaming platforms, with singles “Meant To Be”, “Livin the Life”, “Hold On”, “Circles” and “Better” achieving platinum status. With over 350 million streams, Ananya is the only Multi-platinum selling Indian pop singer.

An core initiative of Asian Education Group (AEG) – considered as the largest centre for professional media, IT, law, management, fashion & hospitality education in Asia with world-class facilities –  the webinar was followed by a lively Q&A Session with the famous young guest.

After a brief but impressive introduction of the famous young guest by Ms. Garima Malhotra on behalf of the AEG family, Ms. Ananya Birla took virtual centrestage of the webinar session all the way from her apartment at Los Angeles, USA. Thanking AEG for the opportunity to talk to the students, she opened the session by straightaway sharing the magic mantra of her life and achievements so far – viz., “You just can’t give up and not take NO as an answer!”

Expounding her belief, Ms. Ananya Birla stated how, when the pandemic hit the USA, she found herself confined to her home apartment in Los Angeles but set-up a studio within the home environment to keep up with her work. She said that likewise, her journey so far in life has been “a journey of not giving up … no matter what!” Her word of advice to the students was, “Just don’t give up … life will keep moving!”

Then, Ms. Ananya Birla retraced her life and ruminated how at the age of 17, she started with her first venture ‘Svatantra Microfin Private Limited’ towards providing small loans to women entrepreneurs based in rural India that eventually won the Gold Award for Best Start-Up (Skoch Financial Inclusion and Deepening Awards, 2014), Spirituality @ Work: Sach Bharat Samman (Sach Bharat Confluence 2015) and has maintained a quality loan portfolio, offering one of the lowest interest rates in the country. She specially talked about the several challenges that came her way and how she overcame them with her stand-out belief that “You just can’t give up!”

In the year 2016, Ms. Ananya Birla became the founder and CEO of CuroCarte, an inventory-based global luxury e-Commerce platform. The same year, Forbes named her one of Asia’s Women to Watch.

Ms. Ananya said that she was truly overwhelmed by success of ‘Svatantra’, especially with the fact that she was able to make a difference in the life and existence of the rural women in India.  At this point, she did not know what to do next but had a strong conviction that “life is all about moving on!” It is here that she decided to follow her passion for music wholeheartedly and professionally … and became what she is today.

She then opened the session for questions from the participants. A lot of questions were put up by the students, most of which were related to her multiple achievements as entrepreneur, singer, songwriter and philanthropist. To each of these questions, the young speaker and achiever provided the most convincing answers.

Answering a question “What inspires you to write such beautiful song pieces?”, the young rock star said that they were “the writings from her heart.” To a question on what singing represented, she said that it represented the “Peace from the mind!”

Next, there was a question on her views on “Entrepreneurship”. Answering this question, Ms. Ananya Birla said that “Conceptually, start-ups should start from a scratch and it should aim to make a difference in the life of people.” She dwelled upon the critical role of “Teamwork” in any such success and acknowledged that she was “lucky to right people around her in all her entrepreneurial successes.”

To  a question in context to Asian School of Business’ in-house Entrepreneurship Development & Incubation Centre (EDIC) on “the important skills required for becoming a successful entrepreneur”, Ms. Ananya Birla answered saying, “Be ready to make your hands dirty and be ready for doing everything.” She further stated, “Many will discourage you, but never give up. Believe in yourself and tell yourself that you can’t give up. Also, be ready to learn from mistakes.”

In conclusion of her most interesting interactive session, Ms. Ananya Birla had a word of career advice for students – “Whatever you take up, ensure that you love doing it and don’t take it as per advice by others. Just be you!”

With this, the session concluded with the customary exchange of pleasantries.