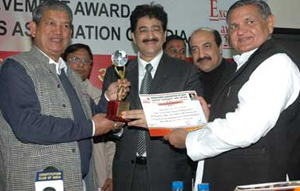 All Rounder Achievers Award India 2011 was bestowed upon Sandeep Marwah today at a grand function at Sri Ram Auditorium in Delhi to highlight his achievements in the field of Media. Prominent personalities from different fields were present there to add on glamour to the award function.

Marwah has created five international records. He has been the founder and spokes person of Noida Film City which has become the fastest growing film city of the World. It has 16 studios and 350 channels are being telecast to 160 countries of the world 24×7. Along with it he established first Private professional film and TV studios of North India and has churned out more than 4000 TV programs for 50 channels and been associated with around 125 feature films for more than 100 film companies.

He has been the director for 20 years of the first private film school of the country where more than 10000 students have been educated and trained in 40 different media courses hailing from 84 countries of the World in a World Class infrastructure with Print, Radio, Television, Cinema, New Media, Events and Fine Arts departments.

Marwah has produced 1800, largest number of short films giving opportunity to 9000 media persons from 80 countries of the World. He has also produced more than 4500 training films in different program formats.
Sandeep Marwah is the only film maker to be honored for his contribution to the nation where 1000 hrs of filming, 10000 pictures, 102 ENGs, 102 radio programs were produced covering 28 states, 7 union territories of India with 300 events and 900 locations moving 20000 km with Queens Baton Relay during Commonwealth Games Delhi in 102 days, free of cost.

Sandeep Marwah started 30 media National and International organizations including International Film And Television Club started 5 festivals in the country, out of which AAFT Festival Of Short Digital Films now touching 73rd Edition only festival of its kind in the World. Marwah was compared to Sachin Tendulkar of Cricket, Salman Khan of Films, and revolutionary like Ganga Lokmanya Tilak from the Indian History.