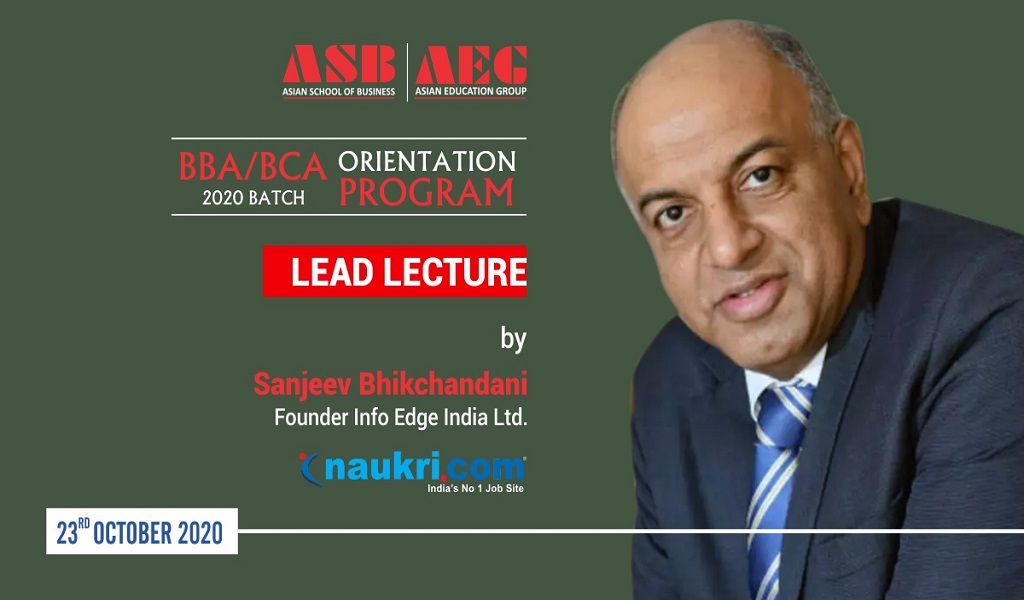 Asian School of Business – which is a part of Asian Education Group and is ranked as one of the best undergraduate B-schools in Delhi NCR –  welcomed its new batch of Bachelor of Business Administration (BBA) and Bachelor of Computer Application (BCA) by launching a grand week-long Orientation Programme scheduled from Monday, 19th October 2020 to Saturday, 31st October 2020. In view of the ongoing COVID-19 pandemic and keeping in mind the social distancing norms, this programme was however organized virtually to benefit the students who were about to begin a new phase in their academic life.

At the ASB Orientation 2020, Mr Sanjeev Bikhchandani, Founder of Info Edge which runs portals like Naukri.com, India’s leading job site (besides other websites like Jeevansathi.com, 99acres.com, Brijj.com, Allcheckdeals.com, Naukrigulf.com, Shiksha.com, and Firstnaukri.com) was an Eminent Guest who delivered a most motivating LEAD Lecture session on Friday, 23rd October 2020 as part of the week-long Asian School of Business BBA & BCA Orientation Programme 2020.

Mr. Sanjeev Bikhchandani is an Indian businessman, who is the founder and executive vice-chairman of Info Edge which owns Naukri.com, a job portal, as well as the co-founder of Ashoka University. A Padma Shri Awardee, Mr Sanjeev Bikhchandani won the “Ernst and Young – Entrepreneur of the Year” award in 2008 for Business Transformation and is recognized as “India’s Fifty Greatest CEOs ever” by Outlook Magazine. He attended St. Columba’s School, Delhi and finished schooling from there in 1981. Thereafter, he obtained a Bachelor of Arts degree in economics from St. Stephen’s College, Delhi in 1984 and completed his MBA from IIMA in 1989. He is ranked #68 in Forbes India Rich List 2020 with a net worth of US$2.1 Billion.

The LEAD Lecture session by Mr. Sanjeev Bikhchandani on Friday, 23rd October 2020 at Asian School of Business conducted as a part of the week-long BBA & BCA Orientation Programme 2020 was an out and out Q & A session that turned out to be not only highly informative but also hugely motivating for all who participated.

The very first question that was put up to him was, “How did you start your entrepreneurial journey?” Mr. Sanjeev Bikhchandani answered that it was only after working for 5 years in the corporate world that he decided that he will be his own boss. He said that he started in a small way from his father’s garage with a second-hand computer and a seed capital of just Rs. 2000/-  Working without any salary, in the year 1997, he launched Naukri.com as the “21st idea” that finally struck success for him! Answering a question about the lessons that he learnt as a student of IIM, Ahmedabad, the eminent alumni of the hallowed institute said, “I learnt a lot from my classmates … especially the value of hard work and working with people in a team.”

Then there was a question as to what one should if they had a good business idea but no money to fuel the same? Here, Mr. Sanjeev Bikhchandani advised the students, “If you decide to go with your business idea, you will need to explain the same at various forums and if you are able to convince at most of these forums, then you find your investors for sure. But, understand the risk, only then jump into it. In any case, you should also a Plan B ready for yourself, just in case it doesn’t click. And, don’t leave your job until you have done your basic groundwork!”

When asked whether he believed that “an idea can change your life”, Mr. Sanjeev Bikhchandani said that it is only possible “if you execute it well”. “Alone, idea is not important. Keep trying. Persistence is important.” Here, he quoted his own example of Naukri.com coming out as the 21st idea!

Asked to share his advice to all budding entrepreneurs, Mr. Sanjeev Bikhchandani said, “Dream Big but start small. Be frugal with your expenses and learn to do it all yourself, until you have struck deeper roots of success.”

Answering a question on the changes in hiring trends due to the ongoing pandemic, Mr. Sanjeev Bikhchandani stated that “not many people are hiring, and it’s quite hard unless you have particular skillsets; hence, work well on your skill set.”

The stream of questions looked unending, but the highly acclaimed entrepreneur answered them all to the utmost satisfaction of the inquisitive ASB students.

Towards the end of his session, and talking in reference to the ongoing COVID-19 pandemic, Mr. Sanjeev Bikhchandani had a small but pertinent message for the students. He said, “Don’t panic. Everything will be alright. Keep going strong with your dreams and ambitions. And, always remember, Persistence Pays!”