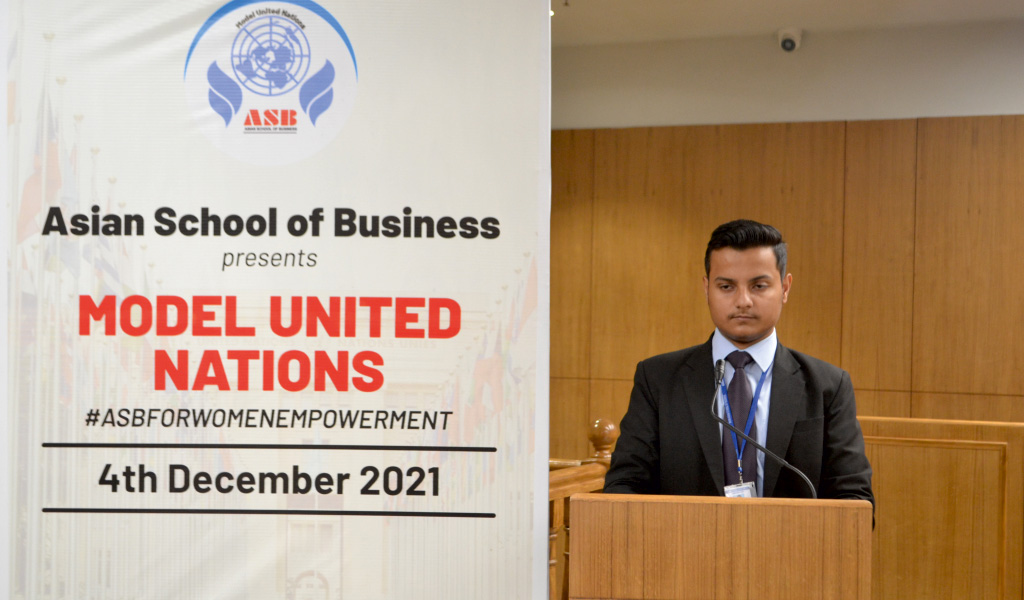 Noida, 4th December, 2021: The Model United Nations (MUN) serves as a forum to promote political discussion and thought among students around the globe. The Asian School of Business encourages students to take part in these activities because they broaden their horizons and give them the tools they need to become future leaders and effective change agents. Asian School of Business organized Model United Nations Conference with the purpose of giving students a highly realistic educational experience. The Model United Nations (MUN) conference brought together 70 students, representing 60 nations, and 10 student reporters representing International Press, to replicate the General Assembly (GA) and the Commission on the Status of Women (UNCSW). The conference began with addresses from Dr. Maroof Ahmed Mir, President of the Conference, and Mr. Siddhant Magon, Secretary of the Conference.

Mr. Arjun Arora, Mr. Neel Taneja (Co-Chairperson), and Ms. Arpita Johry (Substantive Director) represented the Executive Board, while Ms. Anusha Malhotra served as the conference’s Editor in Chief. ASB-MUN, as a simulation of the United Nations, allowed students to both mimic UN activity and understand the problems confronting the international community from a unique viewpoint. The students took on the role of a country’s ambassador and simulated UN deliberations. Representatives had to vocally react to situations as they arose, making impromptu comments based on their expertise and research, rather than giving a planned address.

The Model United Nations came to an end with a valedictory ceremony, which included the awarding of certificates of appreciation to members of the Executive Board and the editor-in-chief. The winners were also presented awards, with Ayushi Goel (BBA 2020) representing Columbia receiving the best delegate award and Shrishti receiving the Best Reporter award (BBA 2021). Mr. Harshal Saraogi, the Deputy Secretary, gave a vote of appreciation at the end of the day, thanking all of the participants, reporters, members of the Executive Board, the Editor in Chief, the conference team, and the organising committee for their efforts.