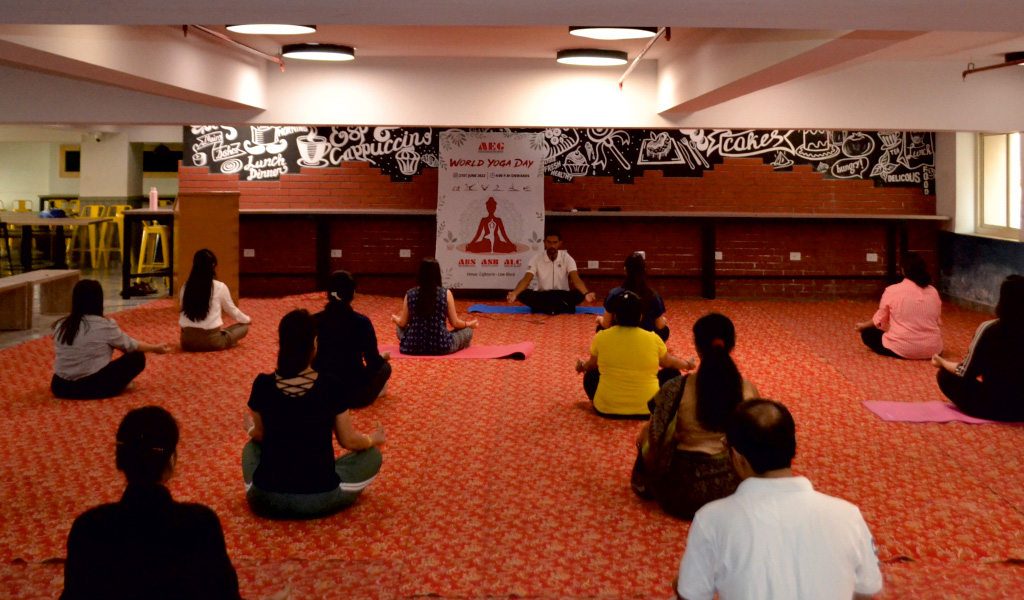 Noida, 21 June 2022: International Yoga Day is observed every year on June 21 to raise awareness about this ancient practice and to celebrate the physical and spiritual prowess that yoga has brought to the world. The idea of an International Day of Yoga was initially proposed by India’s current Prime Minister, Narendra Modi, at the United Nations General Assembly (UNGA) on September 27, 2014. Since 2015, the International Day of Yoga has been observed yearly on the 21st of June. The day is celebrated for raising awareness about the value of yoga and its effects on people’s health.

Asian School of Business, a part of the Asian Education Group, hosted a yoga workshop on International Yoga Day under the theme of “Yoga for Humanity” for the students, professors, and all other non-teaching staff at the “Activity Lounge” of the college.

The event was organised and coordinated by Mr. Gurpal Singh, Dr. Himani Kargeti, Ms. Priyanka Shrivastav, and Ms. Pritha Sengupta. The pre-lunch session was conducted for the students of the Asian School of Business with the introduction of pranayama and the practice of asana. The latter half was taken up by the teaching and non-teaching staff of the Asian School of Business.

The event was coordinated by Dr. Himani Kargeti, who started the workshop, by briefing the students on various “asanas.” and their benefits when performed on regular basis. Taking the event forward, Prof. Gurpal Singh—a professional yoga trainer—showed the right way of performing the various Asan’s. During the sessions, Mr. Gurpal Singh explained the importance of yoga in our lives. He explained that practising yoga regularly helps achieve better mental and physical health. He started yoga demonstrations with the yoga prayer. The warm-up and simple Asanas were performed by the students, teachers and staff enthusiastically.