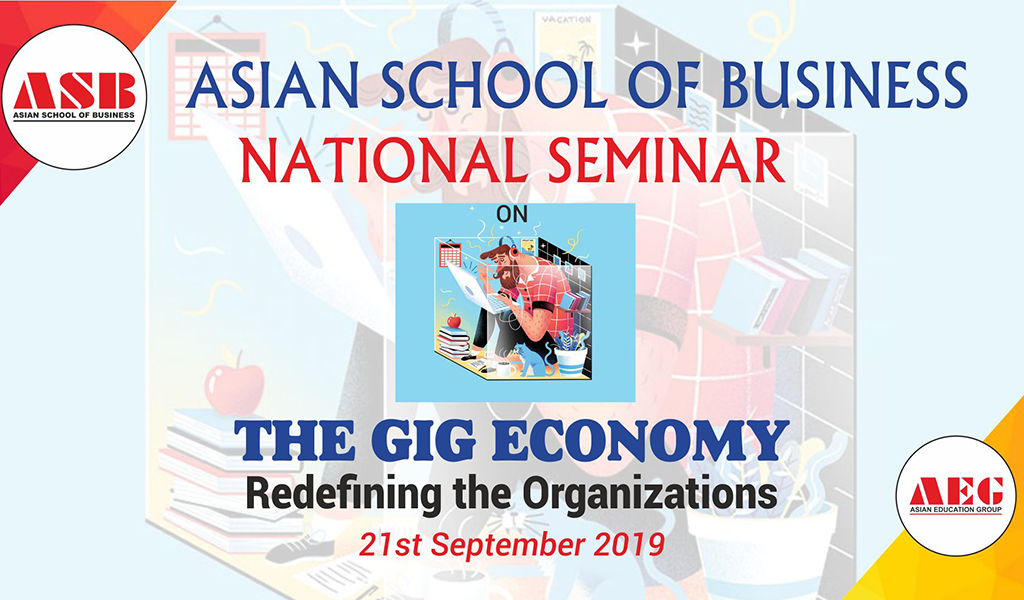 Asian School of Business is proud to organize the National Seminar on “The Gig Economy – Redefining Organizations” Gig workers are now slowly but steadily becoming an indispensable part of modern-day companies. With the start-up ecosystem in India mushrooming exponentially, many present-day companies wish to hire freelancers as compared to full-timers, resultantly strengthening the outlook of the gig economy. Many types of research indicate that a significant percentage of employees in our country are willing to give up on the perks that normally come with a permanent job in exchange for greater flexibility in terms of working and the freedom to choose multiple assignments based on their specific skill sets. Niche talents who have an in-depth understanding of new-age technologies and skills are going to be gigsters of this economy. In many developing economies, the idea of a gig economy has already made deep inroads. One of the recent PayPal reports indicates that India currently contributes 1 out of 4 freelancers across the globe. At the same time, the push for a digital economy as well as government initiatives like “Digital India” are adding to the momentum and posing convenience for gig workers. Whereas in the recent past, creative portfolios such as editing or graphic designing have paved the way for the most numbers of freelancing opportunities, and consultancies and IT related roles (programmers, developers) catered to contract jobs, other service sectors are now catching up with the “gig economy” mandate. Gig economy somewhat eliminates the need for in-house skilling or upskilling of the regular labor force by an organization. Hence, the gig economy not only helps firms reduce internal financial pressures and bring in cost savings up to a great extent, but also provides a win-win situation for workers as well as the organizations. All of this goes to show why the gig economy is a trend that is going to not only stay but change the dynamics of job markets altogether by breaking stereotypes and slashing limitations.

OBJECTIVE OF THE SEMINAR