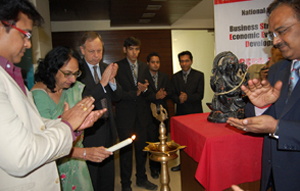 Asian Business School successfully organized National Seminar- SEED 2012 on ‘Business Strategies on Economic Evolution and Development’ on October 12, 2012. The day’s proceedings were in three sessions, starting with inaugural functions having the key note addresses by the chief guest Mr. Debasish Biswas , Vice president Star TV. He emphasized on the economic evolution and transformation of business strategies in the current competitive era. He also addressed student’s fraternity on the relevance of the theme in individual development. It was followed a talk by Mr. Mark Runcares, guest of Honor, Indian Advisor, he discussed about the modernization and realistic approach towards development of economy of India. He also talked about India as a source of inspiration to the world in standing firm at the time of economic crisis in the world. He said India has set lot of example in front of the world in terms of economic sustainability. 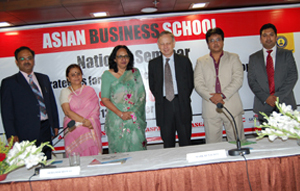 After this inspiring talk Dr. Kavita sharma, Director IEE addressed the gathering. She focused her talk on the importance of culture and society for economic evolution. Ms. Amita Joseph also shared her views on the theme. Dr. Lalitya Vir Srivastava , Director Asian Business School, Noida delivered plenary talk on the theme of the national seminar SEED 2012. He emphatically elaborated that recession in India was more psychological then being real. He gave various important live examples which was applauded by the delegates and dignitaries present.

The technical session were conducted parallel in two halls. Several delegates from various domains delivered presentations of there research papers. Valedictory session was then conducted in the gracious presence of Mr. Sandeep Marwah, chairman, Asian Education Society. Best research paper presented, in faculty member category, was awarded to Dr. K Tara Shankar from Meerut and Best research paper award in student category was given Ms. Ramya and Ms. Arijita Mukherjee of Asian Business School. This day turned out to be intellectually stimulating and memorable.