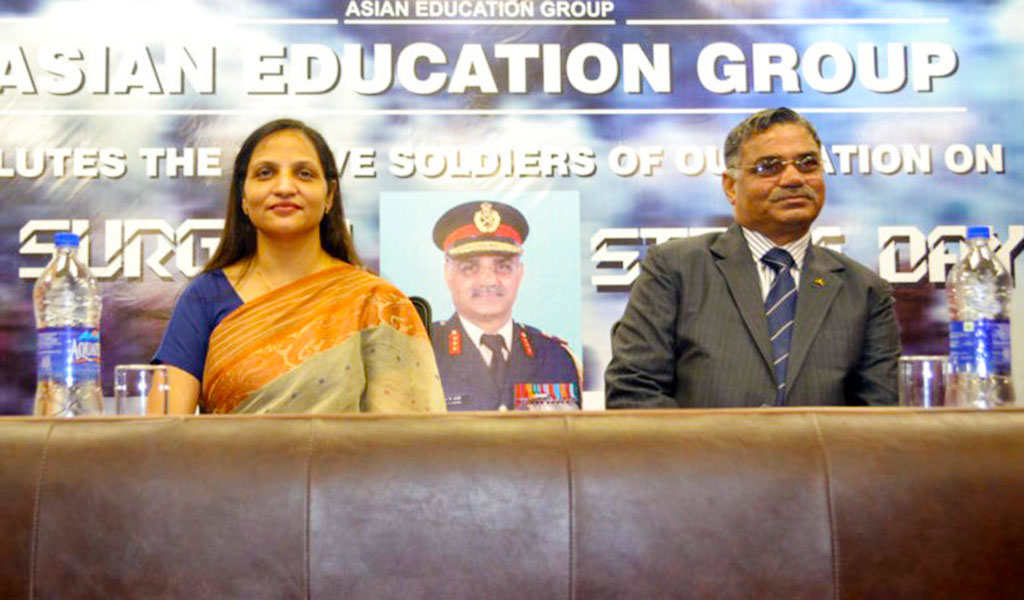 Pursuing the decree issued by the University Grants Commission to observe 29 September 2018 as Surgical Strike Day, marking the second anniversary of the Indian Army’s strike against terrorists operating across the Line of Control in Pakistan occupied Kashmir, Asian School of Business organized a guest lecture for its BBA students. The idea was to commemorate and highlight the valour and sacrifice of the Indian armed forces in general and special forces in particular and encourage students.  The Indian armed forces have always brought laurels to the nation. That is why we proudly celebrate Vijay Diwas, Kargil Vijay Diwas and many battle honour days every year. To celebrate Parakram Parv at ASB who better than a soldier of the nation who as a young lad took up the mantle of protecting and guarding his motherland and rose to giddying heights. It was none other than Lt Gen AK Bakshi AVSM, SM, VSM, a highly decorated officer of the Indian army with several military awards given for gallantry and in recognition of distinguished service of an exceptional order. A wonderful speaker, he skillfully painted the absolute plot of the adroitness with which the operation across the border was carried out with surgical preciseness. The nerve tingling narration of the shrewd perspicacious and discerning strategy with the impending dangers, had all ears glued. Students listened with awe and close attention.

Soft spoken but steely with a sharp wit and clear sightedness he made a wonderful connect with the students and apprised them of the fact that the surgical strike could never be categorized as a political gimmick as it was carried out to send a strong message across the world that though Indians are tolerant and a peace loving nation they are not to be taken for granted and would retaliate when pushed into a corner. Students were with him all the way. Such sessions are immensely enjoyed by the students and also create more awareness and national pride in them.