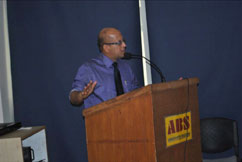 Salil Sahu is the Managing Director of Home Stores India Limited (HSIL), a part of Wadhawan Retail Limited. HSIL runs retail stores in food and grocery. He joined as the CEO of HSIL in July, 2007 post the takeover of the company by the Wadhawan group. Salil began his career as a Management Trainee in Shaw Wallace in 1989. He has twenty-two years of experience in sales, marketing, strategy and general management, the last 8 of which have been in P&L management. He has worked in  Wipro, Heinz, Shaw Wallace and a start-up and has been part of many pioneering initiatives.. He has steered the successful acquisitions of three retail businesses for the Wadhawan group.?

He is a mechanical engineer from NIT, Rourkela with a PGDM from IIM, Calcutta. He is a distance runner, a bibliophile and is a regular speaker in various events.

On 3rd August 2012. He delivered a lecture on Retail Business in India. In his lecture he emphasized on the growth of Retail business in India. He also talked about FDI in retail and what good and bad it can do to the domestic players in the market. He made the students understand the organized and unorganized retail that operates in our country. He discussed some successful studies of the market. With the lecture the students could understand why retail business is flourishing in some place and flop at some places.