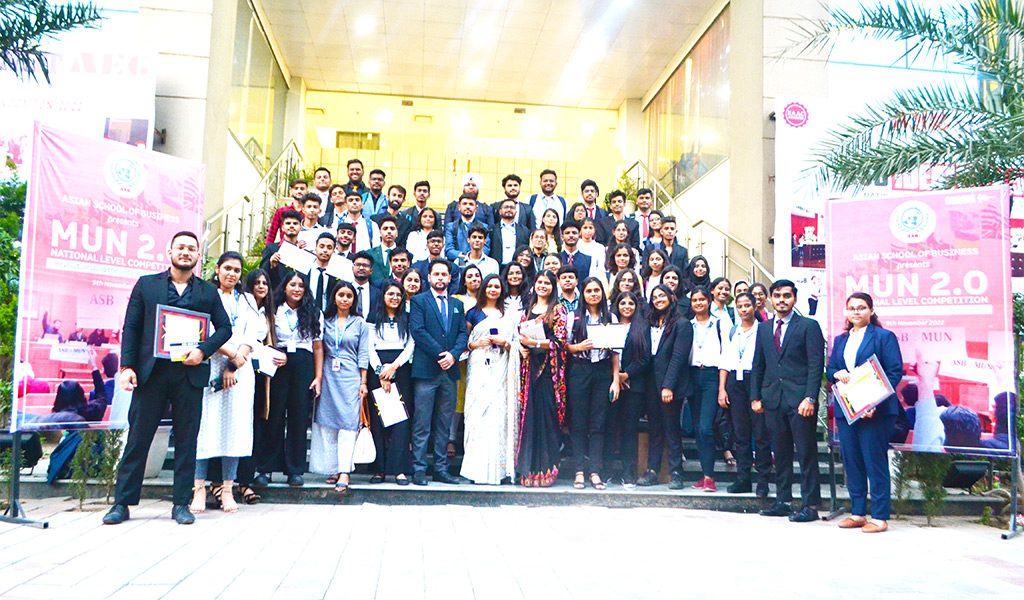 Speech has power. Words do not fade. What starts out as a sound, ends in a deed.” – Abraham Joshua Herschel
In a world, as polarized as ours, diplomacy is often claimed as a dying art. Aiming to educate the students about current events, international relations, and diplomacy along with the knowledge of the world we delve in and to witness valuable skills such as researching, public speaking, debating, writing, persuasion, situation analysis, critical thinking, teamwork and cultural empathy, Gnosis- The Literary Club of Asian School of Business organized Model United Nations 2.0 on November 9, 2022. this was the second edition to the series of MUN organized so far.

The United Nations Human Rights Council (UNHRC), the United Nations Commission on the Status of Women (UNCSW), and the International Press (IP), were the committees of the conference. Each committee had its own agenda for discussion. Within the committee, the students had to assume the role of a diplomat and conduct research for the agendas in an effort to discover answers to the pressing issues of the day. On the day of the event, the participants joined together to generate documents reflecting their policy views through public speech, discussion, lobbying, and negotiations.
A total of 151 students participated in the event who were categorized into UNCSW, UNHRC & IP. As the club aims to liberate the thoughts and let the minds speak with creativity and give the power of conviction and authority in the speeches, the event witnessed some of the most powerful and gripping arguments in the moderated and unmoderated caucuses. A few deserving delegates were awarded various titles, such as “best delegate,” “high commendation,” “special mention, and so on, at the conference’s conclusion. The participation certificates were also distributed at the end of the event. Overall, it was a judiciously organised event by the core committee members.