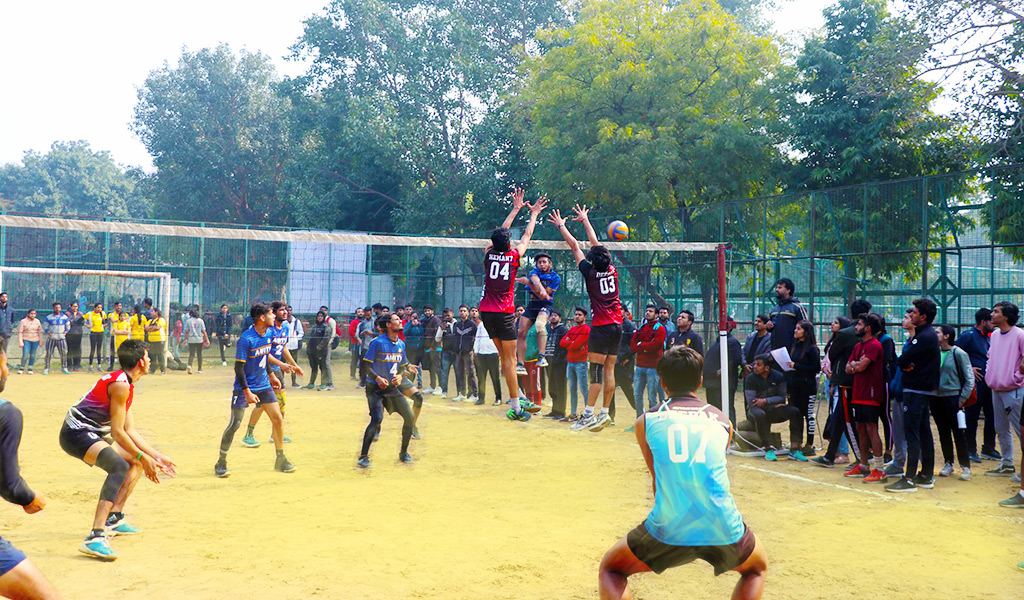 Asian School of Business (ASB) – which is a part of Asian Education Group (AEG) and is ranked as one of the top ranked BBA/BCA colleges in Noida – recently held its most impressive annual inter-college sports event – ATHLEEMA 2020-Season 8 – from 21st-23rd January 2020 at the state-of-the-art Jasola Sports Complex, New Delhi with its quintessence punch of excitement and grandeur, much accentuated by the glorious presence of the Indian football legend, Mr. Baichung Bhutia as the chief guest for the occasion. A total of 50 top colleges of Delhi NCR actively participated in this high-pitch athletics’ meet including the two other constituent group colleges of Asian Education Group, namely Asian Business School (ABS) & Asian Law College (ALC).

Of the several games in which competition was held, one was the absolutely thrilling game of Volleyball that pepped up the ambience at AEG’s 8th Annual Inter-College Sports Meet, ATHLEEMA 2020 in a big way!

Here’s an account of how it happened at ATHLEEMA 2020-Season 8:

Volleyball is a sport that demonstrates muscular strength and mental agility of the participants.

For this event at ATHLEEMA 2020-Season 8, there were several teams from various colleges of Delhi-NCR that participated enthusiastically in this game. The participants first registered at the venue on time and then had warm up sessions with the umpire.

This was followed by making of fixtures in the presence of the team captains, the team coaches who had come along with the teams, and the scorer of the tournament. It was decided that there would be three rounds of matches between any two teams that would play and the best of the three scores would be counted in the knock-out matches.

As per the fixtures, the matches started and everybody really enjoyed the atmosphere. All the college team members were wearing their favourite jerseys and they made a sight to look at.

The atmosphere was very lively. Between sets, there were people moving around and loud music playing. During the match, the crowd cheered and clapped. There was a group of fans that were playing drums and singing songs to support their choice teams.

The final set in boys’ category between PGDAV College and Sharda University was especially close but in the end, PGDAV won the match with two winning sets against Sharda.

Everyone enjoyed the matches even though some teams lost because volleyball is a very impressive sport to watch. It was amazing to see how high the players could jump!